‘Good’ Landing vs ‘Bad’ Beaching – and where ‘Intertidal Landing’ might fit 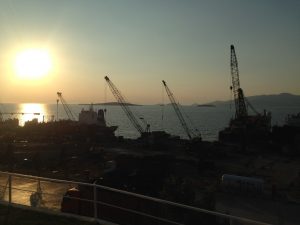 s often difficult to explain to people why one ship recycling facility is deemed acceptable compared to another. Poor certification practices create a false impression that badly operated facilities meet international requirements; legislators and others in the industry continue to state that some methods of recycling are acceptable, but others are not; some of the recyclers themselves struggle to explain the fundamental differences between the ‘landing’ and ‘beaching’ of ships; and there continues to be sweeping generalisation about standards by country, rather than investigation into individual facilities regardless of their location or method of recycling.

Understandably, this has led to confusion within the ship recycling industry, and in the wider maritime community.

To add to the confusion, for decades there were four main recognised methods used to recycle ships: Drydock, Alongside, Landing, and Beaching. However, in the last couple of years, a ‘new’ type of ship recycling facility has seemingly arrived on the scene, specifically in Alang, India. The term for this new recycling method has been coined by the recyclers themselves: ‘Intertidal Landing’.

But what is this new type of recycling – is it simply shipbreaking jargon, or a legitimate new method? And where does it sit in the beaching versus landing debate?

Rather than stating that landing is always ‘good’ and beaching is always ‘bad’, this summary seeks to contrast defining features which, if operated well for a landing facility and poorly for a beach, will help to illustrate the concepts of ‘good’ and ‘bad’.  Further, we illustrate some possibilities of how an acceptable compromise of an ‘Intertidal Landing Facility’ may be achievable, although we do not comment on the economics of this proposal or its long-term viability.

For the purposes of the illustration below, the following generalisations / examples apply:

‘GOOD’ LANDING FACILITY: A landing facility located in Turkey with Hong Kong Convention certification and an application for inclusion on the EU List of Facilities under consideration.

‘BAD’ BEACHING FACILITY: A traditional beaching facility located in Pakistan with no reputable certification and substantiated media reports relating to loss of workers’ lives due to HSE issues.

‘INTERTIDAL LANDING FACILITY’: An upgraded beaching facility located in India with Hong Kong Convention certification and an application for inclusion on the EU List of Facilities under consideration.

For ease of illustration, the ‘bad’ aspects may be somewhat accentuated.

In conclusion, it seems that the ‘Intertidal Landing’ compromise could become a recognisable method of ship recycling, as and when it has been proven to work in practice. It should be noted that the outcome of the European Commission’s inspections at Alang’s EU List applicant yards is likely to either accelerate or stall this process.

That aside, a key issue with the increased use of the term ‘Intertidal Landing’ is that many Indian recycling facilities have been using the phrase to describe their operations long before any substantial improvements to their facilities have been made. Once one yard – who had made significant improvements to operations – coined the phrase, numerous others started applying the same term. Some of these yards continue to claim that there is no difference between landing and beaching.

Most yards in India continue to use the beaching method and, as such, the wider industry needs to recognise that the term ‘Intertidal Landing’ cannot yet be applied to all of Alang. At the time of writing, only a handful of yards in Alang have invested enough time, effort and resources to be able to consider using the ‘Intertidal Landing’ moniker – whether it becomes universally accepted terminology or not is likely to become clear in the coming months.

This site uses Akismet to reduce spam. Learn how your comment data is processed.